In every language, there are phrases that you can't take literally. I need to remember this whenever someone throws me the phrase, "Guo liang tian." It means, "after two days" but REALLY what it means is, "Not today, lady. Maybe some time in the next few weeks." Ironically, I'd rather have a "guo liang tian" than a "ban tian" which means "half a day" but really means, "Your guess is as good as mine."

I got "guo liang tian" yesterday when I called the management company to find out when the workers will come to fix The Thing. It's like a cancer spreading through our house. Maybe if I take these pictures over to them, I'll get a "jin tian" (today). 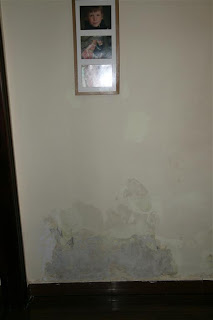 This hallway is where it all began. There was a small spot here when we moved in. The landlady said it was "where a dog peed." Yeah, I don't know any dogs that big. She had it fixed for us, but it's back. (that was supposed to be said all creepy) Every day I scrape off the new paint/plaster that has bubbled. The darker part is where it's constantly wet. 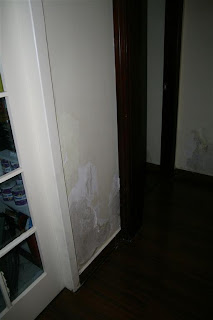 This is the wall across the hallway from the bathroom, which means it's seeping under the laminate floor. 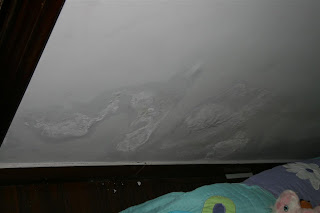 Megan's room, on the other side of the bathroom, has had the brunt of damage. 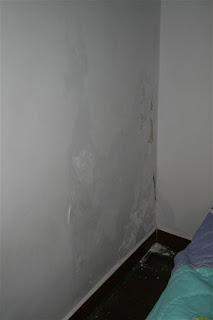 This part's right up by her head. I didn't show the damage in Ethan's room, or our room, but it's growing there too. I had a picture of the flooring too, which is no longer flat but increasingly warped. I accidentally deleted it and feel like eating breakfast instead of reposting it. I think you're probably sufficiently appalled already anyway. Hello, management? Jin tian people!

Thoughts from Gina Marie at 8:04 AM

So sorry, Gina! That does look bad! Hope it gets fixed soon.