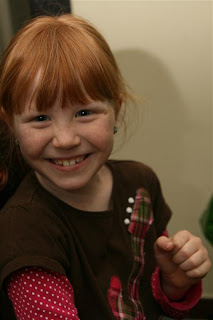 A friend of mine gave birth to a daughter Thursday, April 15th, which brought back all the memories of my own experience 8 years ago (in the exact same room!). We're so thankful we've been blessed with this little girl! She is a tomboy who can spend hours playing with her stuffed animals, loves her friends, wrestles with her brother, is determined to be the best soccer player in the world, is growing in her confidence in front of others (but doesn't lack any with those she knows!), is our family clown, has a sweet, sensitive heart that longs to be connected to us, and is sharp as a whip when it comes to school. 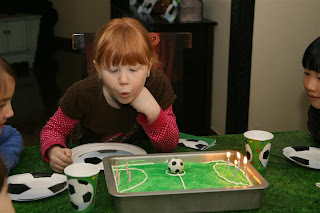 For her 8th birthday, she wanted 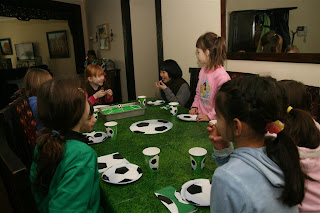 a soccer party. This was a great idea in theory. But in an effort to limit the mass number of children who could be invited to Megan's party, we chose only girls close to her age. Most of these girls didn't have a clue how to play soccer, and if they did, they weren't really interested in it. Megan had grand schemes to play a game of soccer. We started instead with some soccer drill games like "red light, green light" and "sharks an 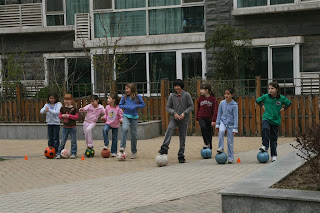 d minnows." I could see most of the girls were losing interest, so we set them free to just play in the courtyard. Megan tried to engage her friends in a game of soccer, but when she told one of them, "You play defense" and her friend responded, "What's defense?" I think she knew enough to give up.

Still, a good time was had by all! 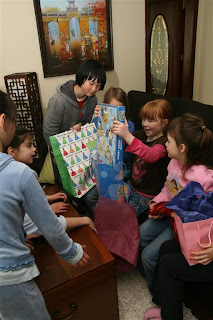 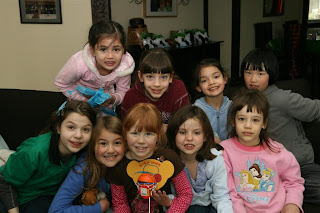 Thoughts from Gina Marie at 9:30 AM

Awwh, happy birthday Megan!! That was awesome decorating Gina, loved that soccer table!!! and from one tomboy to another megan, you go girl!!! She looks more and more like you every time I see her Gina:) She precious, thanks for updating on what all she's doing and her personality, loved reading this post!! I miss you much friend :)