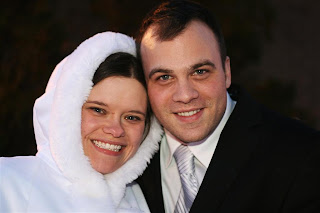 But despite theories, he managed to find himself a decent woman. Ok, that's selling her short. She's honestly everything I've ever thought Christopher needed and more. He's one blessed man. Their wedding was the most meaningful wedding I've ever attended (my apologies if I attended your wedding). I think watching my little brother get married must be a fraction of what it's like to watch your kids get married. It was seriously hard to have a direct view of him! He teared up right away, so there was no hope for me. It was a great blessing for all of us to be included in the wedding party. But words can't really do it justice - suffice to say it was a great day, I'm thrilled for both of them because they are so good for each other, and here are the pictures to prove it all.


PS Rachel I'm jealous you got my maiden name. I really want it back. :)

Thoughts from Gina Marie at 9:03 PM