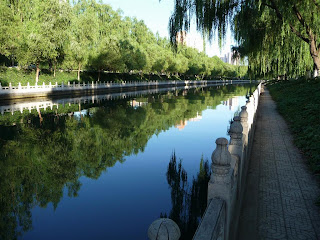 I haven't spent much time down by the canal this summer because unlike last summer, it's been wickedly humid and hot no matter how early I rise. I miss Minnesota summer mornings, the kind where you can still see your breath a little sometimes. Alas, that kind of cool isn't reality here, but at least something where you don't feel like someone's trying to smother you with a blanket. It's just fun that way (I have found myself wondering how on EARTH I ran every morning in Singapore, but I think it was because a) the sun wasn't up and b) I had no choice and c) you really do get used to it when it's constant).

This morning I planned to take one last walk (I've given up on running with this humidity and the stress of moving) around the canal. When I woke up and walked into the homeschool room, I was encouraged that it didn't feel like I was stepping into a sauna, which it usually does. I headed out the door sometime just after 6 into a beautifully cool, sunny morning. I walked about 4 miles in a loop, snapping a few pictures along the way. Unfortunately my camera battery died, so I couldn't capture the collection of old people slapping their legs in unison, the produce market hopping like mad already (along with various other vendors), the people doing tai chi in the park, or the old men painting Chinese characters on the ground with water and giant sponge brushes. But I got to see them, and that was pure joy. I'm so thankful to God that my last jaunt by the canal was such a fun one!