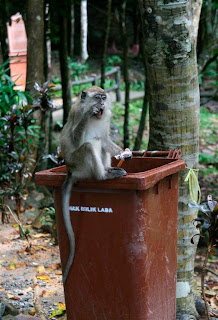 As we traveled around Langkawi, we noticed that monkeys were everywhere. Our first close sighting came at the waterfall, where several of them came for lunch at the local garbage can. Next, we were fascinated to see them on the road in our hotel complex - two mommies with their babies. So cute! As we tiptoed nearer, another monkey - presumably the daddy - came scurrying down a tree and made it clear that we were not to get an inch closer. I think he may even have sworn at us in monkey. He seemed pretty angry. Not so cute anymore.

That night we made the mistake of leaving a bag of rambutans and a bag of raisins on our porch. While we slept a gang of monkeys came and mauled them. We began to think maybe the monkeys weren't our friends.

From then on, we were a little edgy around the monkeys. On Friday, we rented fishing gear and parked next to the road across from the marina. As I stepped from the car, bag of dead fish in one hand, bag of rambutans in the other, I glanced at the trees near us and said, "Erik, I think I'm going to leave the rambutans in the car," and in the time it took me to do that, two jumped down into the tree next to me. That was when we switched into slightly panicked mode and instructed the kids to get out of the car and get behind us while we backed across the street, keeping our eyes on the monkeys. Soon there were four or five - a few of them staring at us across the road, waiting for a break in traffic to follow us, one climbing all over our car looking for a way to those rambutans.

I threw a warning rock across the street toward the one big monkey who was about to follow us. We walked down a path through the woods and spent about 30 seconds at the shore before we decided we'd rather fish from the other side of the marina where the people were and the monkeys weren't. We fully expected to find our car covered with monkeys like something out of an Alfred Hitchcock movie. They were still there, but in fewer numbers. We threw more rocks, Erik ran for the car (way to take one for the team honey!) and we drove away to a safer, monkey-less spot.

Thoughts from Gina Marie at 7:00 PM

Hahaha... It is funny how the idea of "vicious monkeys" doesn't seem right to us! We are so used to thinking of cute cuddly monkeys... curious george! Don't feed the monkeys!