It's a red letter day whenever I actually DO one of the things I've pinned on Pinterest. Today's project was a bit nostalgic for me because I created travel toiletries kits for my kids like the one I had when I was growing up.

Doing this involved buying two large washcloths ($1.43) plus two shoelaces (80c) then paying a very grumpy woman to sew some straight lines on them ($1.27). At first she refused entirely. I realized later that she accidentally left out one of the halves of shoelace I cut for Megan's kit. We'll make do until we get back from Thailand and I can get the black ribbon my friend Karen bought me yesterday. I don't want to deal with grumpy seamstress again. 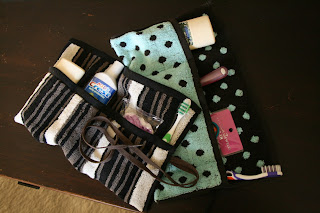 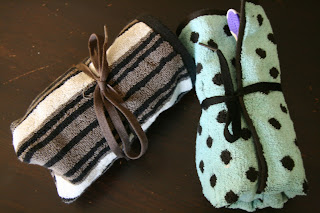 Thoughts from Gina Marie at 3:21 PM