Inspired by the BBC Wild China DVD, our friends, my parents, and we decided to take a trip. When I searched for rural retreats around our city, I was amazed at how much I found! That was good news because our time is limited, and being able to drive somewhere in a day is so much more pleasant and less expensive.

So our first adventure was to take a loop around the west side of town. As we were driving, we happened to see some caves poking out of a rocky hill (see picture in previous post) so we decided we had to stop and explore. Megan later said this was her favorite part of the trip!

Our next stop was planned - Chuan Di Xia, a Ming dynasty era village set against a hill. Most of the homes here are now places where you can eat or even stay the night. We wandered around until we found a woman who welcomed 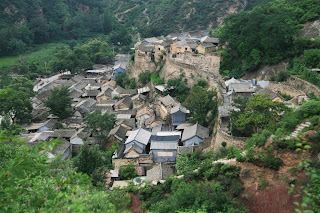 Our next destination was a further 40 km, at the base of Ling Shan, a 2,300 meter mountain. We turned down the first offered guest house and chose one where we took all four rooms at 80 kuai per room. Our host for our stay was a Mr. Yan, who seems to be the big Kahuna in their little town. In addition to taking us up to his restaurant more than once, and helping us arrange horseback rides up the mountain, he also outfitted my dad with a coat. We had anticipated slightly cooler temps there, but it was probably in the low 60's at best and promised to be colder up the mountain. So Mr. Yan led us to his secret stash of coats. First he offered my dad a quilted metallic peach coat that screamed, "I am a 20 year old Chinese girl. Let me get my Hello Kitty backpack." I wanted that coat to fit so badly. When it didn't, he gave my dad the standard giant green army jacket, suitable for sub-zero temps. 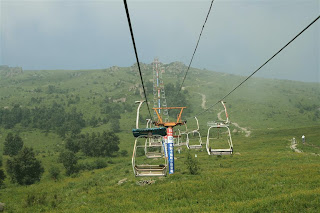 Thankfully, he didn't need it. While the majority of our group rode horses up the mountain, I drove my parents to the cable car so we'd all have a way of getting back to our hotel (although now that I think about it, Mr. Yan might have come in handy there). As we crept up the mountain in a chair lift that certainly was purchased from a ski resort garage sale, suddenly we broke through the cloud bank into sunny skies and beautiful country.

At the top of the mountain we realized we hadn't nailed down the details of where we would meet our party. A few women tried to convince me to hop on a horse to traverse the final distance to the peak. When I told them I was waiting for friends, they said, "They've gone up, we've seen them!" Yeah, I'm not falling for that trick. They insisted that they had seen foreigners go up, one with red hair. Well now, that seems compelling. I asked to borrow a phone. As I was dialing, the woman said, "You should give him 2 kuai to use his phone since you aren't taking a horse ride." The man said, "No, 10 kuai!" We all chuckled. He tried again a minute later, "You should give me 20 kuai to use my phone." I replied, "I'll give you 20 kuai to buy your phone." We all laughed again. Nothing like a little good natured ripping in another language. I finally decided to head up the hill on foot to see if I could find them. Halfway up I started asking people, "Did you see a bunch of foreigners at the top riding horses?" When the answer was "no" I turned around.

The people at the bottom seemed genuinely surprised that I hadn't found my friends. I don't know what foreigners they thought they saw, but our group had come around the other side of the mountain. After our reunion, we all took the lifts back down. I'm a little disappointed to have missed the horse ride, but the chair lift gave a great view.

After another (I'd like to say quick, but it wasn't) lunch, we headed off again on our western loop. We intended to find a reservoir, but along the way we encountered village after village that was too picture worthy to pass. Then we came around a corner to see a giant church on the horizon! We stopped in the village and talked with the locals 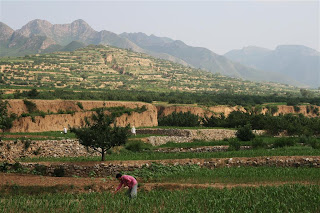 a little. As we traveled further, we passed through terrace farming, which is a sight to see. By the time we'd found the highway back to town, we decided we'd seen enough to ponder for awhile and cut our trip short.


Who knew all this was so close to town? I lived here five years before and never knew it existed. I think we'll be taking a lot of Saturday drives!

Thoughts from Gina Marie at 7:05 AM