Back in my younger days when I was oh so much more foolish, I pulled a bonehead move by passing a car so closely on a two lane highway that both the car I was passing and the car coming toward me were pulling off the road. That, I'm sorry to say, is how many overtaking experiences go down here in China. When this happens and you are the one being overtaken, it's tempting to scream something about the "donkey" driving the other car. But when it happened yesterday in our second Wild China adventure we refrained because there were children present.

We headed out of town about 100km in the other direction looking for a place called Black Dragon Pool. I decided I needed to gain more confidence in driving here so I took the wheel. It was mainly highway until the last 30 km, when it began to be winding mountain road. That's where we encountered said donkeys.

Once safely at our des 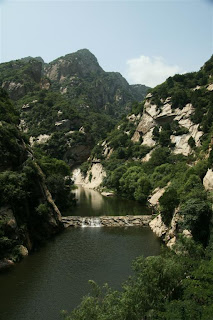 tination, we started hiking. Wow - we thought Ling Shan was a sight to see. This rivals stuff you see in Colorado! Beautiful rocky mountains dip down to flowing waterfalls and creeks. The kids were in heaven once we let them loose into the stream, where they became "undammers", helping the creek to flow as much as possible. Along the hike there were pools where you could rent little inflated boats for 20Y. After hiking all the way up and back, several of us paddled out, trying to get as close to the waterfall as we could. Many happy Chinese walked away that day with pictures of foreigners screaming with joy. Happiness all around.

Happiness turned to screaming on our way out though, when something dropped out of a hanging tree, landed on our friend's son's head, and smacked to the ground. It was a snake! It slithered away, thankful for someone to break its fall, and we spent the rest of the walk trying to encourage a six year old that having a snake fall on your head and living to tell is really super cool!

We decided to take the other way back home, which involved driving around the back side of the mountains. It took a lot longer but it was worth it! Wow - what views. At one corner there was an opportunity to climb up a short peak so we grabbed the chance. The second we were out of our vehicles, we were told by an ancient Chinese man standing there that the experience would cost us two kuai a piece. Ok, buddy, since you've planted your flag out here in the middle of nowhere, we'll oblige. But two kuai be 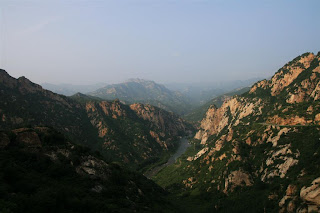 came so worth it when he started talking to Erik about something that would make a "boom boom" sound. He brought us over to his little cart of innocent drinks, lifted up his goods, and showed Erik the surely illegal grenade like explosives to be had for five kuai a piece. Who can pass up a chance to throw something into a deep valley and hear it explode? Not Americans! Erik pulled the pin, threw it, heard it hit the ground and said, "It didn't do anything." Two seconds later, kaboom!!

We ran into a few more donkeys driving cars on the rest of our drive. It was all worth it though to see such beautiful scenery and to give our kids a chance to roam freely in nature. What will we see next?

Thoughts from Gina Marie at 8:27 AM

Wow! You guys are having quite the adventures. How do you find all these cool places? Sounds wonderful. Maybe we can do a family adventure sometime together. We were doing them every Sat, for awhile there. So glad you had fun.