It doesn't get much better than this

Can I tell you about my weekend? Because it rocked. Friday night we had dinner at a friend's house here in our complex. It was a going away party for a Chinese friend who became a believer a year or two before we came to China. As we were leaving to go there, I prepared the kids for who we would see there, reminding them that this girl was their favorite babysitter when they were little. Megan said, "Is she the one who let us drop stuffed animals on her from Ethan's bed?" Uh, I guess so. I don't remember that happening. Since those days of pummeling, she has gotten married and had a little girl. They are moving to Ohio this week so he can study. Also present was one of our first Chinese friends, a teacher at a nearby university. We spent some time reminiscing, and she helped me with a few language questions I've had. It's amazing to think I've known these women for 10 years!

Yesterday morning I went to my friend Jen's house to help her finish painting her bedroom. She'd done most of it except a bit of the edging and one large spot in a corner. As I painted, I commented that the color seemed lighter. She said, "Yeah, I thought that last time I painted too but it dries darker." After an "I'm stuck halfway off this wardrobe" incident in which we both laughed hysterically (at me, because I was the stuck one) I realized the paint had dried and was still no darker. Turned out it was a different liter of paint we'd tried before the color she chose. Oops. Not so fun for Jen, but I enjoyed the time with her!

In the afternoon, our furniture man came. I don't know how it's all going to turn out, but he walked away with drawings and pictures for nine pieces of furniture he's going to make for us, and we were only $1,400 poorer. Nice.

In the evening, some friends came down another part of town and we shared a BBQ meal and celebrated Erik's birthday while our girls ran and giggled through the house. Ethan mostly watched. Our friends also tipped us off to the fact that this morning at their church, Steven Curtis Chapman was going to lead worship and speak. I love it when this happens (it's happened before - SCC likes China).

So after a six mile run in the early morning cool weather (have I mentioned how much I love the canal where I run?) we went and were hugely blessed by SCC, his sons, and Geoff Moore singing and sharing about their experience in China. Then they invited us to join in and led us in a bunch of worship songs. After the service we had a great lunch out with a load of friends, then came home.

I don't know how this weekend could have been better unless maybe there was a pony ride. 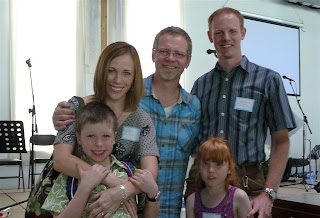 Thoughts from Gina Marie at 6:35 PM

Great blog, Gina, and I love the family picture of you guys, with SCC! So glad we were able to have lunch with you guys, as well. I wish you lived closer so we could do more things together. Looking forward to getting to know you better.