What's happening in this picture? 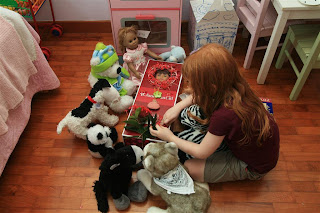 Ok so here's the story. Megan has an American Girl doll named Nellie. Nellie's best friend is Samatha, who is being phased out. Megan really wanted her for her birthday, but she knew of the "phasing out" and believed it was too late. Little did she know that fast acting Nonna bought Samatha ages ago and saved her for her birthday. We brought her back in January and surprised Megan with her on Monday night at our family birthday celebration (I'm going to be gone over Megan's birthday next week).

After the intial shock (she looked at me like, "Really? Is it really her?!") Samatha was welcomed into the community of Megan's room, which is over populated by a plethora of stuffed animals.

Another of her birthday presents was a new toy oven - a pink one that she had seen online, which we also managed to pack in our luggage (before assembly of course). For some reason, Megan decided to combine these two gifts and put her American Girl dolls in the oven. Both girls were cooked at once as this is a dual oven. Nothing but the best for our daughter.

This morning Megan assessed that Samantha had died in the oven over night and proceeded to gather flowers for a funeral. This is the funeral assembly. Quite a variety of mourners. Samantha's life was short, but she was obviously well loved. Either that or it's just general curiosity which brought such a crowd of onlookers.

I really love the funny things children do - you captured this beautifully.

I don't have any children but I have three teenage sisters - I remember them doing weird and wonderful things when they were little. I've even written a little about them.

Ha gina, that was hilarious! Great writing! Have fun being gone, and I mean it...have lots of fun, you deserve it! Miss you!

I love it!! That is so funny and cute at the same time. I love the creativity of children, especially little girls playing with dolls (and ovens).