We've had a few monster thunderstorms recently. On Sunday, I pulled a chair up to the living room window and just watched and listened to one in silence. It was awe-inspiring.

The downside of these awe-inspiring storms is that trees don't always live through them. Down the hill and across Serangoon from our place, there is a large open field dotted with trees. We were amazed that they have left this huge piece of land open without building on it, but we found out that it was previously a cemetery. Chinese are superstitious about living in anything that used to house dead people, so they are waiting until people forget what it was before they build. We think that in order for that to happen, they're going to have to dig up the "I obviously used to be a cemetery" roads. But I digress.

Last night we walked over there to look at two large trees that had fallen. When I say large, I mean large in a way that you don't see back in Minnesota. Huge. And yet toppled by the storm.

Why did they fall? Well, our recent study of the rainforest biome tells us these are canopy layer trees, meant to be protected by emergent trees 30-60 feet taller. Those emergent trees would have buttress roots that spread out on the ground, giving them a solid foundation. Because rainforest soil is so nutrient poor, the roots also must go out instead of down. But instead these trees were standing alone, at least 50 feet from any neighboring tree.

Erik wanted to teach the kids a few object lessons. I'd love to say they looked at him with admiring, innocent eyes, soaked in his wisdom, and afterwards said, "Daddy, thank you for taking the time to share your abundant spiritual insights with us," but I think there was more focus on chasing frogs and complaining about long wet grass rubbing their ankles.

So since they might have let the lessons pass them by, here they are. I thought they were pretty profound.

Lesson #1: These trees were in isolation. These trees were never meant to stand alone in a field by themselves. Canopy trees need the shelter of taller emergent trees that have solid buttress foundations, as well as other trees around them during heavy storms.

Lesson #2: They didn't have deep roots. The hole left by the larger tree couldn't have been more than 2-3 feet deep and at least 6-7 feet wide. It doesn't matter how big you are if you don't go deep.

I don't think I really need to unpack those for you. Here's hoping we aren't being like these trees today. 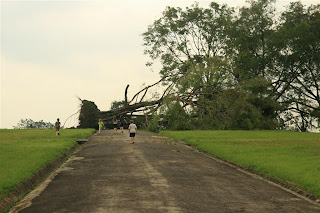 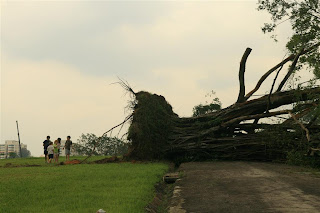 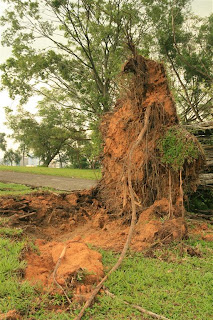 Thoughts from Gina Marie at 8:31 AM

I have to admit... I learned something new and interesting. I like the object lessons. Maybe some day they will be meaningful to the kids but, in the meantime, we adults can make use of them.