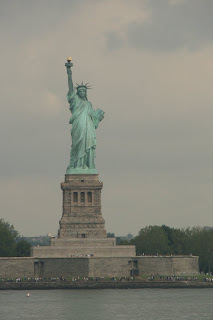 If I had gone to New York as a teenager, I might have had a different life.

I finally got around to spending a few days in the Big Apple last week with my oldest (as in "longest amount of time") dearest friend. And, not to sound too overdramatic (although it IS New York, so I think I have some artistic license here) the city put a spell on me.

I suppose it's because of several things - a) I'm a sucker for theater/drama/performing arts of all kinds, b) I love history and places that have that historical feel to them, c) without kids we were free to wander and explore and therefore get a more local feel for it, and d) I've grown accustomed to living in big cities and therefore feel quite comfortable in them.

But mostly it was a. Growing up, I was involved in a LOT of community theater, hence my feeling that if I had traveled to New York during that time and seen the possibilities to make a life in that environment, I might have given it a shot.

In other words, I might now be a starving artist living in my car.

We crammed a lot of experience into three and a half days, so I'll try to just give you some highlights/observations:

1. New Yorkers are really friendly and polite and helpful. I have to admit this was a pleasant surprise.
2. I didn't expect to see so many Asians. Most of them were speaking their own languages. I'm not sure if it was because they were tourists or just retaining their culture. I kind of hope it's the latter.
3. Manhattan is quite navigable north/south by subway, but not east/west.
4. The subway there makes the subways in Asia look futuristic.
5. We saw Daniel Radcliffe! And Lee Pace! And some guy I know is famous but I don't remember his name or anything he's been in!
6. It is possible to have huge crowds of people waiting for things and to retain order, courtesy and queues. Asia, take note.
7. The Tenement Museum tour in the Lower East Side was awesome.
8. I think I would go to a Broadway show every night if I could afford to. We saw How to Succeed in Business Without Really Trying and Billy Elliot.
9. Pinkberry, why aren't you in my hometown?
10. There is a shocking lack of public bathrooms in Manhattan.
11. Why can't all buildings be made of brick?
12. I love the diversity of the people in NY. I'm more comfortable when I'm the minority.
13. Central Park makes me want to run.
14. I now understand where the 5 boroughs are in relation to one another and am excited to have a context for understanding TV shows set in New York.

Thoughts from Gina Marie at 8:13 PM