Being the daughter of a pharmacist, I am no stranger to meds. In the last few years though, I have tried to use more natural remedies. Recently, I took my first plunge into trying Chinese traditional medicine.

We have an American friend in town who is a licensed herbologist. When I told him of a few health issues I've been having, he gave me a list of Chinese herbs to buy, boil and drink twice daily for 20 days, in addition to a special diet that eliminates all the things that are more difficult for your body to digest. In the process I've learned a couple of things:

1. Chinese medicine tastes like how I imagine the floor of a forest would taste.
2. My body doesn't like to live without chocolate. I was good about the diet for the first week, but this week I've been sneaking some back in. Life is just no fun without it.
3. There might be something to this medicine, because when my friend who does cranio-sacral therapy worked on me on Monday, she said she's never seen me so healthy. (although given that both Chinese medicine and cranio-sacral therapy have their critics, that could be like saying leprechauns can prove the existence of unicorns).

I haven't actually seen if this is completely effective because that will only be noticeable after a month or so. In the meantime, I've learned how to plug my nose and chug lukewarm medicine with the best of them. 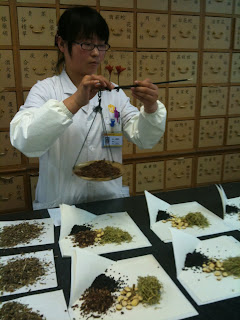 you cracked me up with your likening the cranio specialist's comment of never seeing you healthy to a leprachan verifying the existence of unicorns...veryfunny!! miss you friend :)