Banking on my genes

I just got back from my garden. That's right, I have a garden. I fought a battle with some gnarly bamboo plants whose roots are crazy and even go under the brick path. I felt powerful ripping those things out of the ground, like we were mortal enemies and I conquered them. Hey, I'm small. I have to pick my opponents to match my size.

Armed with my gloves, my shovel, a clippers, and a small rake, I managed to trim back the bamboo I didn't feel like digging out yet (but I've got my eye on you, you rascally plants!) and the rose bushes that are attracting cities of ants. I dug up the random weed like plants that were growing, and removed a great deal of charcoal from the soil. Is charcoal good for soil? Or did someone dispose of their grill remains in my garden?

The back 40 is ready for planting. Or rather, the 2x10 ft strip of dirt below our back windows is ready. My friend Meg and I went to the nursery again and bought some plants. I got a jasmine sapling (which I think I'll plant in a big pot outside), some violets, some cool plants I recognize from Singapore but whose name I don't know (the seller gave them to me for free! I asked her if it was because they are going to die tomorrow. We laughed), and a few smaller flowering plants.

I have no idea if any of those things will grow, or if I've simply brought them to my house to die. But at one point during my work, as I grabbed a rock and threw it on my disposal pile, the image flashed through my mind of my dad doing the same thing in his garden, and I was encouraged to think maybe I could be as good as him someday. If I had $1,000 sitting around, I'd fly him over for a week so he could show me how to do this, because this is what his garden looks like: 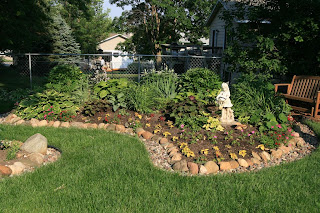 And that's just one part of it, and not even when things are really blooming. I'm hoping maybe it's in the genes. Out of all these plants and seeds, hopefully something will grow! If not, at least I'm having fun in the process.

Thoughts from Gina Marie at 3:32 PM