When I was a poor post college student, my daily lunch was usually a pita stuffed with mayo, stir fried mushrooms, and alfalfa sprouts. I know, not too appealing, but it was cheap!

I haven't had many pitas since coming to Asia, because they're not that easy to find. Usually here I find the "pocketless pita." Hello? That's like a pocketless kangaroo. You're missing the whole point.

So when I found a recipe here for homemade pitas, I thought, "I have to try this." One of the interesting things I've discovered about living overseas is that you can make almost anything from scratch. I even found a recipe recently for homemade vanilla, but you need vanilla beans and vodka, and I have neither.

I didn't have high hopes because it seems a bit tricky to get something to poof up in your oven. I was forewarned that not all of the pitas would puff up. They didn't, but some of them did! Three in fact, out of eight, which is a good statistic if you're say, a major league baseball player. Not so good if you're a doctor and you're counting "lives saved today." But this is pitas, so I say "good." It was really fun to watch them puff up! I felt like a mad scientist, "It's working!!" The ones that didn't puff up I brushed with olive oil and sea salt, baked a little longer, and made into pita chips to eat with the hummus I made (I heart hummus).

The rest I froze for later consumption, like today at lunch. Here's my yummy tuna and lettuce pita sandwich. It was so good I wanted another, but I was out of tuna. And mushrooms and alfalfa sprouts as well. 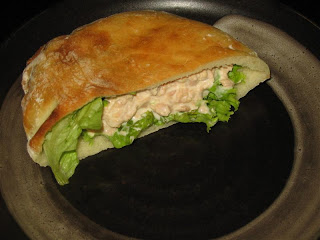