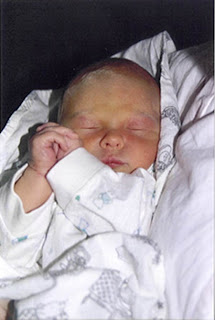 Nine years ago on the night of February 22nd, we had just finished watched The Truman Show with our co-workers and I started to wash the dishes when I felt my first contractions. Finally our little person had decided to come. An hour later some good friends came back from the States with their new son, 3 month old Jackson, and while we showed them around their apartment (which we'd found and had renovated for them) Jenny timed my contractions. I had worried that we might get stuck in traffic in the busy city we lived in, but when we left for the hospital at close to midnight, there were only empty taxis flying by.

Seven and a half hours after that first contraction Ethan John Butz came into the world at 4:33 a.m. on February 23rd, weighing 3.4 kg, which to this day I haven't converted to pounds. He spent his first few days in the NICU because he came out so fast there was fluid still in his lungs. During that time he was fed through an IV, though I came to feed him every three hours. Thankfully, that and his mellow personality meant he was on that schedule even after we took him home! For the first week and a half he woke up twice at night, then once a night for another 5 weeks, then he slept 10 hours a night. Go ahead, hate me, it's ok. God knew I needed an easy baby. 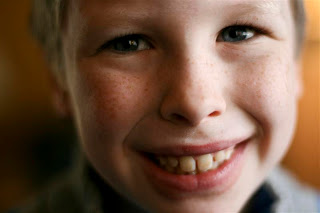 I was just looking back through a journal I've kept for Ethan since he was a baby, and it's fun to remember funny things he's said and done. I reminded him that when Megan was born, he would often spontaneously cry, "I love my Megan!" which he doesn't say anymore. He says it's because he likes babies (he really does!). He also went through a phase where he would ask me, "You so proud of me mama?" This included the time when I told him, "You have a fever."

But we are so proud of him. He's a fun, creative, sharp and friendly kid who has had a lot of experience in his nine years. We're excited to see where the next year takes him (aside from out of Singapore, of course).

Thoughts from Gina Marie at 8:15 AM