I was kind of relieved that Ethan wanted to have a birthday party this year with just his friends who are homeschooled. It meant we could have the party during the week, and invite fewer kids! He decided he wanted to have it at the zoo, specifically in the water zone part of the zoo. The zoo has always had a water play area, but last year they up sized it and we had yet to experience it. 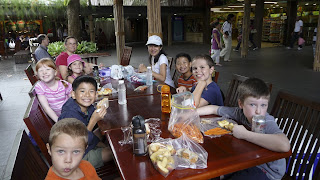 Erik took the afternoon off to come celebrate with us (after all it might be our last time to the Singapore Zoo!). As we drove up to the zoo, we noticed that the huge dark cloud, the darkest one around, was hanging right over it! We met our friends and ate a quick lunch while waiting for the drizzling to subside a bit. It did, just long enough for us to get to the north end of the zoo where the play area is. Once we got there, forget the animals! Every four minutes a huge bucket of water dropped down on the kids. There were water slides and fountains, plus a dry area where they could do a zip line or pull themselves across a pond on a raft. 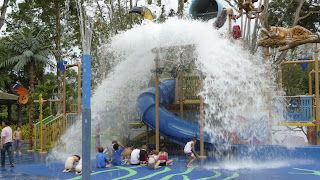 Ethan's passion these days is Bakugans, which are a Korean toy. He and his friends have them, and regularly have Bakugan battles. His heart's desire was to get Castle Legos and Bakugans for his birthday. He also wanted a Bakugan cake. I ended up making cupcakes and coloring the frosting the six colors of Bakugans. What a mother won't do . . . 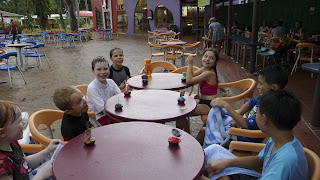 We stayed at the zoo for 5 hours! It rained off and on the whole time, but the kids didn't notice since they were wet already. They would have stayed there longer if we'd let them.

Thoughts from Gina Marie at 2:26 PM