The prospect of seeing Langkawi from up high seemed like a good one. And our kids love the cable cars in Singapore. What could be bad about this outing?

I feel like I should share some statistics about the cable cars - maybe how high they were, distance traveled. I got nothing. Just imagine going high and being able to see a forest covered island surrounded by ocean. Really we couldn't see the whole island - just the western part. It's not that small. But the cable cars are at the western tip, so we could see ocean on three sides. Unfortunately it was a pretty hazy day, so the view wasn't breath-taking, but it was enjoyable. At least it was enjoyable to the adults. To the kids, the ride in the cable car was cool. The climbing out and staring off into space was cause for whining, complaining, and at some points downright refusal to move. Ethan's default setting to new situations is "resistance." If he doesn't know what something will be like, even if it sounds fantastic, he will insist he doesn't want to go and will have no fun at all. That's how he was by the time we reached the second stop on the cable car. There was no way he was going on the tree top walk - it was down steps, he was tired, he was bored, pick your excuse. The crazy thing is that even when he does have a good time (say when we found The Loaf and he had such a fantastic meal) it doesn't reinforce the idea that new can be good. In fact, when we went to The Loaf the next day, he didn't want to go. I think this disproves Pavlov's experiments.

We, on the other hand, were enjoying ourselves, and then it got even better. It's hard to see in the pictures, but literally this cloud starting creeping up the mountains, seeping between trees and appearing in front and then soon all around us. Before long we were actually in the cloud itself. We enjoyed that as long as it took for the park people to shoo everyone back into the cable cars and down the hill. I've never experienced anything like that, literally being consumed by a cloud. It was the highlight of the cable car for me. 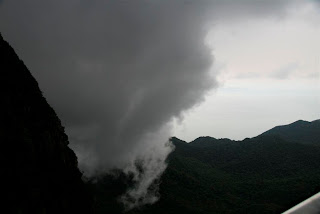 Here comes the cloud, peering around the corner at us. 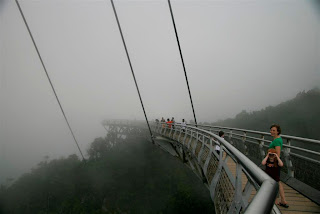 You can't see the end of this walkway, where we were just a few minutes before. Not five minutes before this, you could see the ocean looking this direction.

Thoughts from Gina Marie at 7:26 AM