Langkawi Diary #2 - On Finding and Consuming at The Loaf 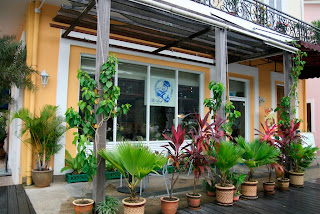 Vacation eating is an adventure in itself. Thankfully, we have children who aren't that picky. But they are kids, and on any given day in a restaurant, their desire is to eat fried chicken and french fries. Hopefully followed by dessert. So we knew we had to strike a balance between the adventurous and the known.

Langkawi is not without western eating places, but we were on the far side of the island. We ate our first meal at the Sheraton and while it was beyond fabulous, the price was beyond our budget, so we decided to see what we could find.

At lunch we braved a little Arabic place, where our server's English was not superb. We got a lot more french fries than we ordered, and a little more hummus too. That evening for dinner we drove into town, thinking we'd find the big mall and something we recognized. We found the little mall and a place called Merry Brown's, or something like that. Imagine the worst KFC you've even eaten in, and you're probably imagining this place. That includes KFC in other foreign countries. I told Erik after those two meals I felt like I'd sucker punched myself. Our culinary future looked bleak. We bought cereal and milk, and headed home.

The next day, fueled by Honey Graham Life with just a hint of "I've been shipped a long way from home and have sat on a shelf a tad too long" we decided to try a restaurant we'd seen advertised called The Loaf. Situated on the marina across from our Arabic disaster the day before, we found this little gem. Everything on the menu looked good, and bonus of all bonuses, we hit it during the 2nd anniversary sale, so everything was 1/2 off. Suddenly not only was it appealing, but also affordable! 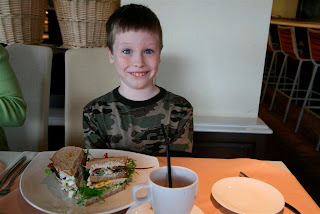 All our food was spectacular, but Ethan ordered the club sandwich and it won grand prize. I've only eaten club sandwiches at hotels in Thailand, which are made with white bread, iceberg lettuce, questionable chicken, and other bits. Never again will I treat my stomach so unkindly, now that I have tasted The Loaf's Superior Club Sandwich. And this is coming from an "I eat so I won't die" girl. We vowed that The Loaf would become our new cafeteria.

What can I say? It was the best restaurant I've ever found on vacation. I would go back to Langkawi I think, just to eat at The Loaf. Definite highlight of the trip.

Thoughts from Gina Marie at 5:45 PM