Getting your hair cut: 20Y. The experience: Priceless

I may have mentioned it before, but the one area in my life where I am consistently adventurous and spontaneous (seriously, the ONE area) is my hair. Sure, I do some research and try to find a picture of what I'd like, but often I will decide I want to change it and within 24 hours, it's done. Sometimes drastically. 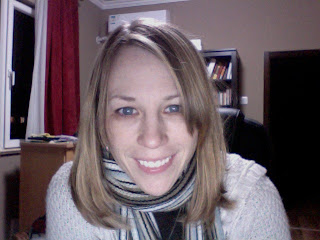 This is what my hair looked like yesterday. I found a picture, printed it, and was about to head out the door, when Megan came in sobbing. She has a history of not wanting me to get my hair cut. She kept saying she didn't want me to change. After several minutes of assuring her that I was only going to change on my head, I was out the door.

The only place I've tried to get my hair cut nearby is what I call the "Hair Police of Xi Yi." If you know Uptown in Minneapolis, you've heard of the Hair Police. It's the kind of salon where you feel somewhat ashamed of getting a normal haircut. Everything is funky and edgy. This is Hair Police China style.

They all lit up when I got there, like, "Ooooh, who gets to cut the foreigner's hair?" The task fell to a young guy who I think was named "Ou Yang" but it was hard to tell because it was a busy place with pop music playing. He washed my hair, then patiently listened to my explanation of what I wanted. He did point out that the girl in the picture has more hair than me. True, but she also probably had about a pound of product in it. I don't know how to say product in Chinese (at least not hair product). I think that was his disclaimer that I wasn't going to look like her.

And I didn't, but theoretically I could, if I had that much hair product and someone else styling it for me. But, as always, I walked out looking like Donna Reed. Or maybe Elastigirl. I don't know why, but Asian hairdressers really like to curl my hair under with giant brushes in a wildly wholesome looking way. I think they don't realize how easily my hair will curl, unlike most of theirs. Once I tried to ask my hairdresser in Singapore to make it a little wilder, maybe flip it out some. So she curled it under, and then flipped the very bottom out. Sigh.

In any case, I just go home and fix it. I might have just cut him off, but he was having such a good time, and there were so many others transfixed by my presence, and especially by the color of my hair (which I assured them was not 100% natural) that I felt I didn't want to rob them. I got to field lots of questions about my life and ability to speak Chinese, which was compared favorably with theirs (they are all from the South, so Mandarin is almost as much their 2nd language as it is mine).

So now I need to get some good styling products if I'm going to achieve the look of the picture, but until then, this is what I have: 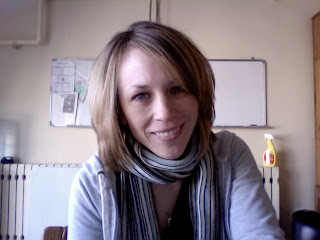 Thoughts from Gina Marie at 3:32 PM

Thanks Tracie! This really isn't the best picture of it. I need to get over to Watson's and get some kind of product for it. But so far I like it much better!

Gina! You look gorgeous girl!! Seeing these pics of you made me miss you so much!!! Love the hair cut, the young man did a great job!!!! Love and miss you :)

Aw, Lindsay (Lindsey? I always forget if it's an e or an a) I know I can always count on you to be an encourager! Good to hear since today is a "I haven't washed my hair so don't judge it" kind of day. :)