Ok, so above is the picture of what we wanted to make for our friend's 4th of July party. Fun right? So we set out to make it. Now because I am often impatient, I did not refer back to the instructions, which was my first and repeated mistake. Primarily this resulted in me having to make an extra cake because I initially baked 2 white cake rounds instead of a white and red, then a red and blue. So altogether we had 6 cake rounds. Six! Oy. If only that were the worst of it.

Assembling proved difficult as I injured my wrist and was trying to rest it, so I had to give instructions to my family while I watched. By the time we got all the layers together, on a scale of "Nailed It!" to "Epic Fail", we were cascading toward the latter, as you can see below. 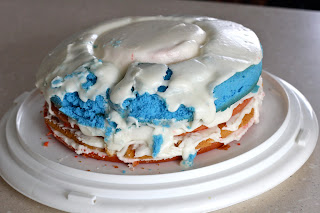 At this point, I was ready to throw in the towel, but Megan was desperate to bring this cake to the party. We left it in the refrigerator overnight, hoping it might pull its act together by morning. It did not.

But wait - cutting in to it proved that there was hope! Yes, it seems we managed to make two red stripes next to each other (yet another proof of Gina's strange reluctance to actually refer to instructions. You would have thought that trying to fit 3 cake round halves alongside one cake round and wondering why they weren't the same height would have been my first major clue. 1/2+1/2+1/2 is not equal to 1). 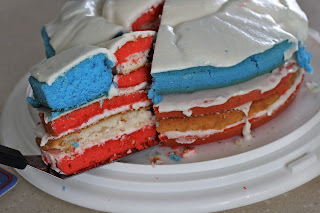 So we trimmed around the outside and made an obscenely large second batch of frosting with which to cement the cake together long enough for it to be consumed by the hungry, patriotic masses. Here it is waiting to be judged in our little mini-competition: 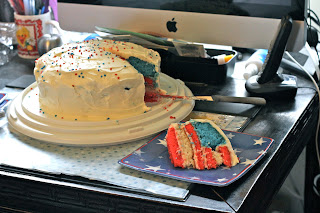 We won "most patriotic" which seems fitting somehow - the American way always seems to be a fight against the odds, isn't it?

Next time, (if there is a next time) I think I will just use red cake and put copious amounts of white frosting in between as the white stripes. I mean who doesn't love more frosting?

Thoughts from Gina Marie at 8:53 AM

Very cool and very brave. I saw this on Pinterest and really pleased to see someone i know try to make it.