We have lived in Asia for 10 years and 3 months. Up until two weeks ago, here is all the snow we have seen outside of Minnesota: 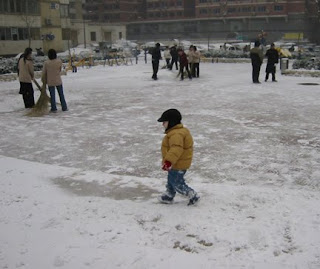 The Great Snowfall of November 2003 (Megan not really enjoying the snow, but smiling briefly for the camera). 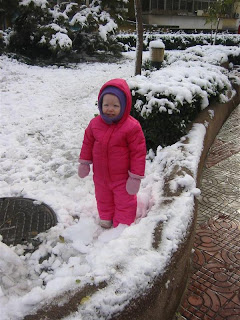 I think one other time there was a light dusting. But here we are in the middle of our third snowfall in two weeks. The first time was several inches. The second time was six! This time, it's still too early to say.

Thankfully, co-op is canceled today so we can just enjoy the snow. It's one of those days when I love the part of town we live in because the park across the street is a beautiful winter wonderland, and the courtyard is a giant playground for the kids. There is an army of snowmen out in the courtyard. They've even built up a big enough pile to make a tunnel! This morning they were playing hide and seek by following each others' tracks. Ethan was clever and walked backwards to confuse his friends. They were so busy they didn't come in for lunch until 12:30, and now they're back out again. Let it snow! 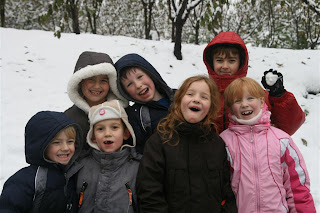 This is the picture you get when you tell the kids to say "snow!"

Thoughts from Gina Marie at 9:56 AM