What to do with snow 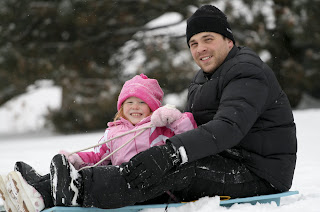 When it started snowing and turned cold here, I mentally panicked a bit and thought I might end up spending the rest of our time inside. How could I go outside when it was so cold?! But the arrival of several inches of snow, and the possibility of cute "kids in the snow" pictures drew me out with the kids, Erik, and my brother this morning. Turns out it's really not all that cold. You just have to dress for it (which I am now able to do again thanks to Old Navy).

We tromped down to a hill by my parent's house that was blanketed with untouched snow about 6 inches deep. We brought four sleds and a shovel (shovels actually make decent sleds). After I'd taken a few pictures and returned the camera to the house, I joined in on doing what we did when we were kids. It all comes back to you - when faced with chilly temps and loads of the white stuff, you keep warm by configuring the snow into various play devices. In our case, we built jumps for sledding.

After building what we thought was a great jump, we sent Christopher and Ethan down for the inaugural run. We think the weight of the two of them together somewhat destroyed the jump, but that's part of the fun - you rebuild better. After a few runs, it had had enough but not before watching various family members launch themselves over it.

At that point I'd had enough, but it was a fun trip down memory lane. Forts, people, tracks, angels, jumps - there's no limit to what kids will make from snow. And it looks like we have enough of it to try every one.